The other day I had a very interesting guest at Sushi University from America. We’d like to introduce them to you. It was their first time in Japan and they stayed in Tokyo for a week. They planned to see Asakusa, the Shibuya scramble crossing, Meiji Shrine, the robot restaurant and all the other usual tourist sites. However, the conversation all seemed to be focused on food.

The thing that surprised us most is that they were going to Sukiyabashi Jiro the day after their Sushi University experience.

On the other hand, there is nothing wrong with a special trip to visit a restaurant with a Michelin star as part of your vacation so you can boast about it with your friends. We have also visited Paris’s Guy Savoy and Florence’s Enoteca Pinchiorri, and treasure those memories myself.

Returning the conversation to the American guest, they did already have impressive knowledge about sushi. Even their sushi chef was impressed at their knowledge. They had also done their own research and were talking about Ginza’s Sawada (two Michelin stars) and SUSHI BAR YASUDA. On top of that, they had come to Sushi University to test their skills and took that knowledge to Sukiyabashi Jiro. In the major American cities, there are a wide range of omakase sushi courses that cost over $500, at which they had eaten many times and had negative comments.

Perhaps they were sushi connoisseurs.

Before continuing, please read the exclusive articles in major media and research papers. 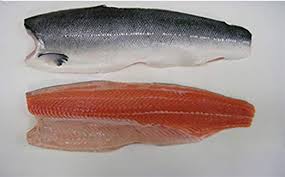 The red tide (algal bloom) frequently occurs off the coast of Chile and it is resulting a large amount of salmon deaths. In 2015 27 million salmon died in a mass event, of which 25,000 tons were powdered and then fed to the healthy salmon (according to the UK’s Guardian reports).

Chilean fish farmers are using large quantities of antibiotics to control fish diseases. They use 500-700 times more antibiotics than Norway does. 80% of antibiotics imported into Chile are intended for the fish farming industry. Faced with the risk of bacteria resistant to antibiotics emerging, as highlighted by the World Health Organization (WHO), the Chilean National Fish Service is calling for a reduction in the use of antibiotics. (Extract from Le Monde diplomatique Japanese edition）

The bright color of salmon is something that you would never see a long time ago, but is now commonplace. It is likely due to the Canthaxanthin pigment mixed into their feed. Salmon is in fact a white fish. The salmon that is caught in Japan is called “Shirozake” or white salmon and its flesh is not a pink before it goes out to sea. Once it is out at sea, it swims around consuming small plankton and crustaceans such as shrimp and krill. Its body then takes on a pink color due to the intake of natural coloring of Astaxanthin. This Astaxanthin has antioxidant effects and it is noted for playing a part in relieving fatigue and preventing aging. However, the synthetic pigmentation that creates the salmon pink does not provide the same health benefits.

The US Food and Drug Administration (FDA) gave approval for genetically modified salmon on November 19th, 2015. This genetically modified salmon is called “AquAdvantage salmon.” It grows faster than regular salmon and its body length is almost double. There are groups opposing the sale of this salmon, including US citizen group Center for Food Safety, the Japanese Seikatsu Club, and the European parliament. There are still many unknowns regarding the safety of this type of fish for human consumption, and a number of issues are still being debated. The discussion has been featured in “Nature” magazine.

Endosulfan is a type of organochlorine compound, like Dichloro Diphenyl Trichloroethane, Dicofol, Heptachlor, Chlordane, Mirex, Pentachlorophenol, and is known to be extremely toxic, but the EU approved Endosulfan for use as feed in Norway’s salmon farming industry in 2013.

Researchers analyzed the risk-benefit ratio based on levels of contaminants like dioxins, PCBs and chlorinated pesticides versus omega-3 fatty acid levels. While farmed salmon is higher in omega-3s, it is also significantly higher in these toxins (about 10 times) which can produce birth defects, lower IQ, and cause cancer. They determined the following based on origin of the salmon: “consumers should not eat farmed fish from Scotland, Norway and eastern Canada more than three times a year; farmed fish from Maine, western Canada and Washington state no more than three to six times a year; and farmed fish from Chile no more than about six times a year. Wild chum salmon can be consumed safely as often as once a week, pink salmon, Sockeye and Coho about twice a month and Chinook just under once a month.” (Extract from The Journal of Nutrition)

There is a saying, where there’s smoke, there’s fire. It is unlikely that big media outlet and research organizations would join forces to circulate incorrect information. Furthermore, this is not a problem that only affects certain countries like Chile or Norway. It should be considered as a problem for the entire farmed salmon industry.

On the other side of the debate, there are articles such as the following. Norway’s NIFES (National Institute of Nutrition and Seafood Research) sampled 13,180 farmed fish (of which 90% were salmon) and monitored them for medicines, substances that are prohibited by law, and other pollutants, publishing their report on August 17th 2015. In their latest report, it concluded that Norwegian farmed fish were safe and that illegal and undesirable substances were not observed to exceed standards. Further, it seems that they have confirmed decrease in most of the pollutants analyzed in the investigation.

But the fact is that, according to these articles, while the chemicals did not exceed standard values, they were certainly found to be present in farmed salmon. The other extreme would be to say that eating natural un-farmed salmon will not expose you to the potential risks from these types of chemicals.

Taste of Home: Can I Eat Raw Salmon?

The Right Kind of Fishy: Can I Eat Raw Salmon?

We tried ‘cell-grown’ salmon that looks, feels, and tastes real. Its makers want it to be the norm someday.