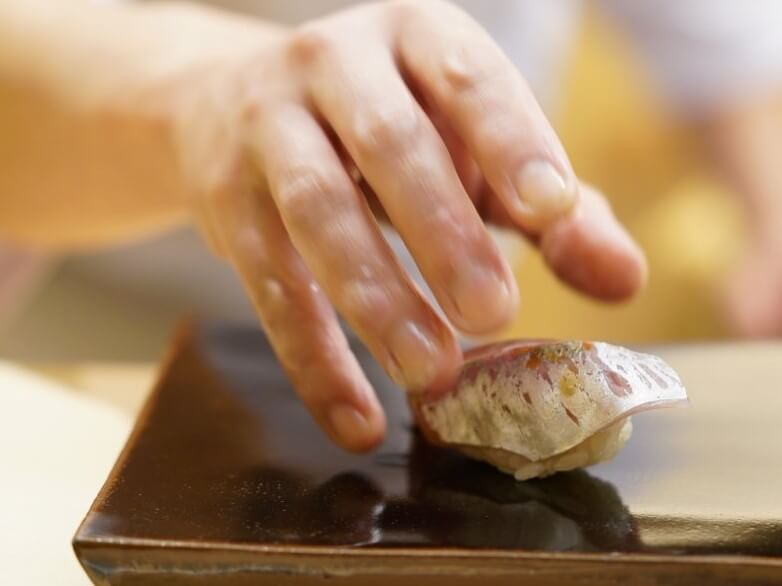 Even Japanese people can be overwhelmed by the somehow special atmosphere when they sit down at the sushi counter. This continues even when starting to eat. Other customers are concentrating on eating, quietly. You kind of get the feeling that if you utter anything, you will be asked to leave. If you don’t end up mustering up the courage, you just end up paying the high price for your meal and going home without much more to say of the evening.

Eating sushi at a counter is not inherently this dull. So why do sushi meals so often end up this way? The problem is knowing so little about the sushi, and feeling like you’re the visiting team on the field.

For example, it is taboo for new customers to take the seat positioned directly in front of the sushi chef. This is a special seat reserved for regulars. Even if the seat is empty, a newcomer will be shown to a seat in the back. This is an unspoken rule.

Contrary to their countenance, most sushi chefs are actually friendly and experts in the art of conversation. They especially value the back and forth with regular customers. For example, they have a keen memory, and can reiterate to the customer that their last visit was on the way home from a baseball game and they ordered a second helping of Chutoro fished in Oma. Of course this pleases many customers. A master sushi chef prepares sushi while standing in front of the customer. If there was to be no conversation with the customer, they can make the sushi back in the kitchen and have it served. Sushi restaurants are a place for conversation. 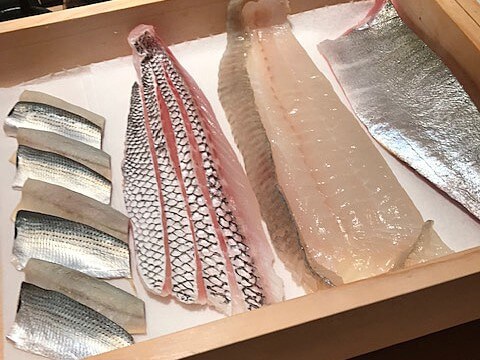 The customer ends up not remembering which fish they ate. For example there are very few people who can name the order of the 15-piece Omakase course they ate. You may be sure you ate tuna. But where was it caught? Was it the belly side or the back side? How long had the fish been matured? To be a bit more frank, how much did it cost? If you ask the chef these questions, next time you visit, you’ll be able to compare different taste based on the fishing location. Knowing the difference in taste based on the part of the fish, and difference in flavor depending on where it was procured, and different taste depending on the preparations will certainly improve your sushi literacy remarkably. It will also lead to a better awareness of your own taste preferences.

But there are limitations to the time allowed for personal conversation. For example, in a normal 2-hour Omakase course, there may be five minutes or so available for conversation. It might not sound like much, but that is also the amount of time allocated to regular customers. Newcomers often can’t find a time to get a word in and end up with only the initial greeting, which takes about 10 seconds.

Of course that’s for Japanese customers who speak Japanese. What about foreign customers who cannot speak Japanese? First of all, conversation is impossible, so this cuts the enjoyment factor of the sushi restaurant in half. But the sushi is delicious, right? Perhaps, but you’ll end up satisfied with the small-world view cultivated for you by the media, limited to whether or not the fish is fatty, or if the meat is fresh and firm. This is something you can experience anywhere that sushi is served in the world.

What we offer is a totally different experience.

You get a seat in front of the master sushi chef, a knowledgeable interpreter is seated by your side, and the Omakase show is presented right in front of you. The obliging chef explains each piece of sushi as you eat with a gentle demeanor. He will also answer any questions you think of on the spot. You won’t be able to say that you don’t know what you ate. We prepare a translated list of your Omakase menu. You are also welcome to take pictures whenever you’d like to preserve the enjoyable memory. All you need to do is forget time and immerse yourself in the Edo-style sushi, one of the staples of Japanese food culture.

The other day I had a very interesting guest at Sushi University from America. I’d like to introduce them to you. It was their first time in Japan and they stayed in Tokyo for a week. They planned to see Asakusa, the Shibuya scramble crossing, Meiji Shrine, the robot restaurant and all the other usual tourist sites. However, the conversation all seemed to be focused on food.

The thing that surprised me most is that they were going to Sukiyabashi Jiro the day after their Sushi University experience.

On the other hand, there is nothing wrong with a special trip to visit a restaurant with a Michelin star as part of your vacation so you can boast about it with your friends. I have also visited Paris’s Guy Savoy and Florence’s Enoteca Pinchiorri, and treasure those memories myself.

Returning the conversation to the American guest, they did already have impressive knowledge about sushi. Even their sushi chef was impressed at their knowledge. They had also done their own research and were talking about Ginza’s Sawada (two Michelin stars) and SUSHI BAR YASUDA. On top of that, they had come to Sushi University to test their skills and took that knowledge to Sukiyabashi Jiro. In the major American cities, there are a wide range of omakase sushi courses that cost over $300, at which they had eaten many times and had negative comments.

Perhaps they were a Michelin secret eater.

How to eat sushi properly

Generally, start by eating fish with a lighter flavor like white fish and move onto fish with a heavier flavor such as Toro, Uni, Japanese conger (Anago), and then Egg (Tamagoyaki). Finishing with Seaweed rolls at the end is a typical way.

The following menu is an omakase style at 3 michelin star restaurant in Ginza. Begin with white fish?

And Egg (Tamagoyaki) comes last, just along the general order. Perhaps the way this owner serves might have become common. 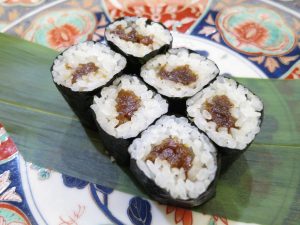 To maximize each flavor of toppings, have some pickled ginger or hot tea between different types of sushi for cleansing your palate. You don’t really have to stick to the specific order, though. It seems like having customers eat freely is the idea held in common by most sushi chefs. However, it is true that you won’t be able to taste the next flavor after eating something rather sweet. Japanese conger (Anago), Egg (Tamagoyaki), and Kanpyoumaki should be eaten at the end.