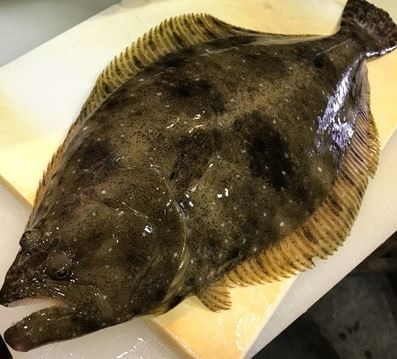 Hirame is a high-quality fish that goes for at least US $50 per kilogram. It can even exceed US $80 per kilogram, depending on the timing and the fish’s body.

Hirame is a typical shiromi (white meat fish) when winter is approaching and a great sushi topping to start off a meal. Also, the taste is so delicate that the original flavor can be cancelled out just by adding too much soy sauce. How the chef expresses this delicate taste is a tribute to his skill and something that foodies look forward to.

In the US, Hirame is often written as “halibut” on the menu of sushi restaurants. Technically the English name of Hirame is Bastard halibut. Hailbut (referring to Pacific halibut) is called “Ohyo” in Japanese. In Japan, the engawa of massive Ohyo is often used as a substitute for Hirame engawa at conveyor belt sushi, but the two are not confused for each other. There is no mistake that Hirame is related to halibut, but they are completely different species. Incidentally, the price of Ohyo is US $3 to $20 per kilogram. It is incomparably cheaper than Hirame.

Also, depending on the restaurant it may be represented in a variety of other ways such as fluke, flatfish and flounder. These terms refer to relatives of Hirame (鮃) or Karei (鰈), but do not indicate any certain species of fish. In other words, there is generally no distinction between Hirame and Karei in the US and to go even further, all white fish are thought to be the same species.

The delicious taste of fish is dependent on the distribution of fat and the amount of inosinic acid. Therefore, fish taste better in the seasons when they have fattened up. On the other hand, people have a hard time distinguishing between types of fish when comparing the tastes of the parts with less fat. The free amino acids in fish meat differ only slightly between different types of fish. In other words, the flavor of all fish is mostly the same. It is only the amount of fat and the amount of the umami component, inosinic acid, that differ between fish, so apparently even sushi chefs cannot distinguish between fish just by eating the back part, which has a low fat content.

This is part of the reason why in the US all white fish is all lumped into the same category and to top it off, the common consensus there is that white fish has no flavor.

At sushi restaurants in Japan, generally there are at least two types of white fish on offer. It is practically guaranteed that Hirame will be in stock in winter. The light flavor unique to this white meat that spreads with each bite maximizes the aroma and sweetness of the vinegared rice. Recently, white fish with high levels of fat such as Kinmedai and Nodoguro, have become standard, high-quality white fish.

The difference between how even these sorts of white fish are handled in the US and Japan is astonishing. That said, flavorless Hirame is not consumed as sashimi or sushi even in Japan. It is served in dishes with strong flavors, like carpaccio. It’s possible that delicious Hirame is just not available in the US. 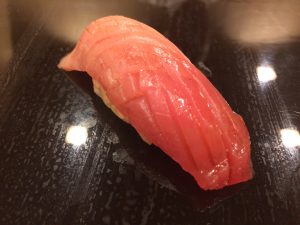 Meji Maguro (AKA: Meji) caught in fixed net fishing is one type of sushi topping that you really should try. Meji is the larval fish of Pacific bluefin tuna, made and served at expensive restaurants, but not usually available as Edo-style sushi. Its fat is lighter and it doesn’t have the impact that fatty tuna has. Efforts are put into seasoning to avoid this. Using a pinch of ginger, Japanese basil or onion between the topping and rice, along with the wasabi, really brings out the fresh flavor of the young fish as well as the sweetness of this fatty part.