Do you know the difference?

The naval (actually the anus) in the middle of the body serves as the border separating the head part (top) and tail part (bottom) of the eel. The fat is distributed better on the top. People used to say that since the bottom moves more it is more tasty, but is this really true? 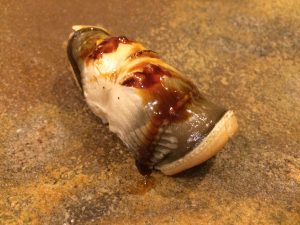 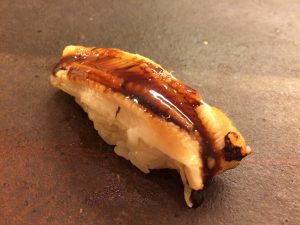 Skin-down means that the meaty side is facing up and the skin side is on the rice.

Conger eel easily melts apart when it is boiled and broth enters the part where it separates, so the appearance is not as appealing. But unless the crack is extremely obvious, both the top and bottom of the conger eel is often prepared skin-down in sushi.

Tuna caught in the coastal regions of the Japan Sea is notable as the best bluefin tuna in January. Iki, a small island in Kyushu area is one of the famous ports for tuna.

In February and March, the tuna auction market becomes slack due to rough weather. Just a few tunas from Nachikatsuura where is also the famous port for tuna are on the market.

In March and April, tunas become thin because their eggs need many nutrients.

In May, large tuna is seldom seen in the Tsukiji Fish Market. Even if there is, its body is really thin. “Kinkaimono” which means a shore-fish is generally considered as high-class tuna, but in this season, imported tuna is useful instead.

It is said that Pacific Bluefin tunas spawn around Japanese waters between Taiwan and Okinawa in April and May. And then, they go up to fertile, north sea along the eastern coast of Japan.

In June, “Chubo” which is young and small tuna is taken hugely off the coast of the Sea of Japan. The school of Chubo begin moving northward in this season.

In July and August, tunas can be seen occasionally but their bodies are still thin. Instead, Boston Tuna which is caught in the Atlantic Ocean and nicknamed “Jumbo” is on the market. Its fresh is softer than “Kinkaimono” and it doesn’t have medium-fatty part which “Kinkaimono” has.

In September, Boston Tunas are at their best with plenty of fat on them. The best season of Boston Tuna is limited and ends in October. But fortunately, Japanese tunas come into season.

The school of tunas split up into two groups, the one takes Pacific Ocean route and another takes the Japan Sea route and both of them move northward along the Japanese Islands. Some of them reach the Tsugaru Strait where and the season of Tuna begins from September to next January. Oma town and Toi town is famous nationwide for its catch of tuna from the Tsugaru Strait. The flavor of tuna in September is still weak but it becomes stronger in October. In November, feed of tunas such as Pacific saury or Japanese common squid with plenty of fat increase and flavor of tuna also gets stronger. In December, the peak season comes around.

A catch of tuna falls off in January and it enters the final season. The temperature of sea water gets cold and feed of tuna, squids decrease and the fishing season in this area ends.

Once a bluefin tuna is caught, it arrives in Tsukiji fish market within a day or two. However, that fish is not used as a sushi topping that day. No mater how good the tuna is, it starts out very stiff and is not in a state where it should be eaten. The meat is hard and the white muscle lines are left in your mouth. The odor and acidic taste of the red meat is strong and the unique sweetness of the fish is nowhere to be found. After it has rested the muscles soften, bringing out the fat. 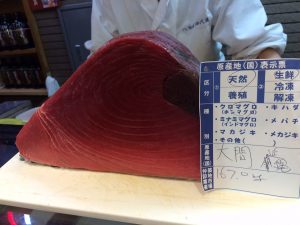 Then, when the sushi chef gets the tuna, he first separates the red, lean meat and the fatty toro portion, rewraps them separately and, seals them in plastic and puts them on ice. Next is waiting for the “young” meat, not yet suitable for eating, to mature. The number of days the fish will be rested depends on the size of the fish and the temperature. The smaller the cut and the warmer the temperature, the shorter the rest time. Generally the time is from 3-14 days.

This “young” fish not ready for consumption is a fresh, deep color but as it matures the color darkens, the fat is brought out and becomes a fleshy color. Proper care must be taken because if it’s rested for too long, the color changes too quickly.

At sushi restaurants, only the master chef makes the sushi. Depending on the shop, the apprentices don’t even touch the knives. The texture of a fish changes greatly with the way a fish is cut, drastically affecting the workmanship of the sushi. There is a clear difference in taste when the master makes a piece of sushi from when the apprentice does. It is also commonly thought that a sushi chef can only take care of about 8 customers at once while he is also preparing pieces of sushi, so most counters have around 8 seats.