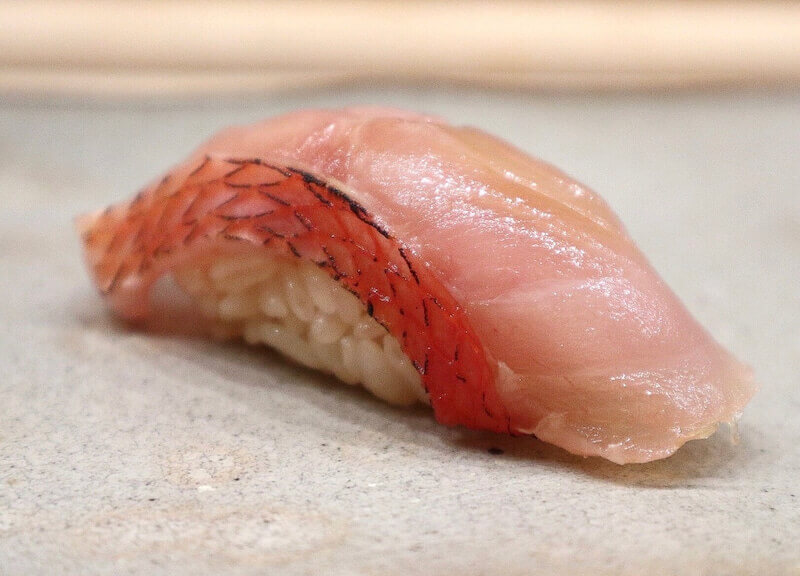 No one is more sensitive to the changing of the seasons than sushi lovers. This must be because the taste of sushi toppings is directly tied to the seasons. There are terms to describe this such as Hashiri (early season), Sakari (in-season) and Nagori (late season), and using these words to understand what state the sushi topping is it allows you to grasp and enjoy the various different flavors. There is nothing that says a sushi topping is less delicious because it has a lower fat content.

For example, everyone wants to get in there and be the first to eat early season toppings. It’s obvious that these would all be toppings with low fat content. But early-season toppings have a liveliness that you can’t find in other foods, and some believe that eating these types of food will give you new vitality.

Once a fish is in peak-season, we eat it as sushi. This is because the fish has grown as it approaches breeding season, gradually gaining more fat, and at this stage in its development it has a richer flavor.

And the ‘holdover’ perhaps means that since the season is about to end, we need to get our fill now. While we may feel a bit sad that the season is ending, we can look forward to it coming around again the next year.

On the other hand, there are sushi toppings that don’t seem to fit into the seasons, although the seasonal dishes are one of the important reasons that Japanese food was registered under UNESCO World Heritage.

Those are deep sea fish such as Largehead hairtail, Japanese bluefish, Pollack and Splendid alfonsino.

Deep sea fish live at least 200 m below the surface of the ocean. For example, Splendid alfonsino lives at a depth of between 100 to 800 m deep, so it would generally be thought of as in-season in the winter when it has the highest fat content. However, except just before and after spawning season, the flavor of the Splendid alfonsino doesn’t change much throughout the year. Therefore, even high-end sushi restaurants always keep it in the topping case and it’s a popular choice.

Since very little light reaches the deep sea, the water temperature remains more or less constant. In other words, there aren’t really seasonal (temperature) changes. The concept of season may not exist there.

Even so, you can think of it as especially delicious in the winter between December and February, when it has a higher fat content. Otherwise you might start to think of it as a fish that is “in-season” all year round, like salmon, and that just doesn’t feel quite as splendid.

The human tongue tends to sense food that is slightly acidic as delicious, and tends to sense it as not delicious when there is alkaline. When fish is alive, the alkaline levels are low, but after dying and beginning to stiffen, the glycogen in the muscle meat turns into lactic acid and becomes acidic. However, as more time passes, the rigor morris releases and the body softens. This is when it tastes the best. After that the proteins break down increasing the amount of alkalines such as ammonia. Also, since the proteins dissolve when they become alkaline, the body breaks down as the alkaline increases. This is the reason that fish tastes worse as it loses its freshness.

Learn more
We hope this information will be helpful.