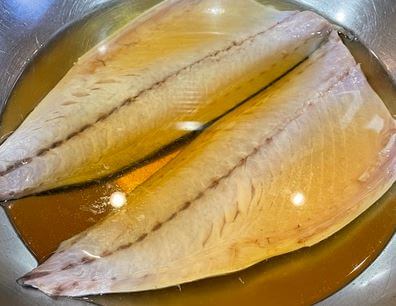 Warisu refers to the vinegar when doing Sujime. The fish is first washed in water, then soaked in vinegar. When working with blue-backed fish, the smell of the fish’s fat is removed from the surface with vinegar that has been used once before (and thus has a low acidity). This is called Suarai. When preparing fish with Sujime, cooled Warisu is used, made either with a 10 to 3 ratio of vinegar to ice, or the same ratio of vinegar to cold water. Vinegar with a high acidity that hasn’t been cut with water only soaks the surface of the fish (denaturing it) and the vinegar does not penetrate to the inside. In addition, if the temperature of vinegar is high, such as during summer, the skin and body of the fish soften. That’s why the vinegar is diluted (acidity is between ph 3.3 and ph 3.7) and used as chilled Warisu. After the Sujime of the topping is finished, it is important to place it in the refrigerator and allow the meat to mature slowly. For fish with strong fat, that fat oxidizes faster than the meat can mature, so it must be done very carefully. 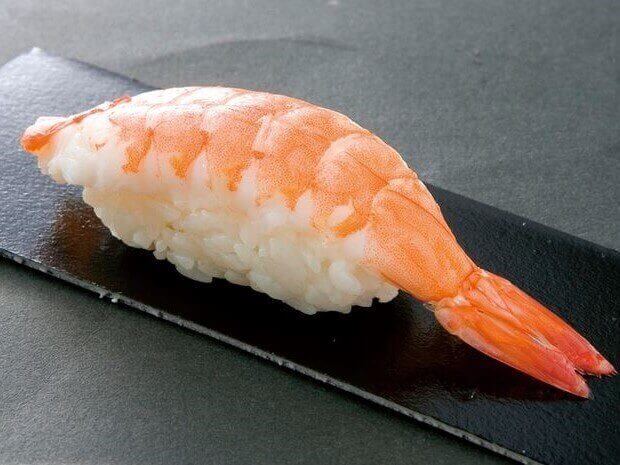 Japan leads the world in shrimp consumption by far. Most of the shrimp is imported, but it is a little known fact that shrimp is called “Meki” among importers and sushi restaurants in Japan. It is said to be a remnant from a time when much of the imported shrimp came from Mexico (pronounced “Mekishiko” in Japanese).

Shrimp can be caught within 45 degrees north or south of the equator. The caught shrimp is quick-frozen on site and then sent to Japan. Mexico was early in advanced refrigeration technology so when it became impossible to catch shrimp in the seas around Japan in the 1970s, a large volume of shrimp was already being imported from Mexico. It was around that time that importers shortened the phrase “Shrimp imported from Mexico” to “Meki”.

After that the major source of shrimp imports switched to Taiwan, which started shrimp aquaculture, and it is now also imported from Thailand, Indonesia and China. The name “Meki” stuck in the industry, despite the fact that shrimp is now mainly imported from other places in Asia.

Imported shrimp is categorized by body color tones, either brown, pink or white. The color is combined with the place of origin or country name and that is what each type of fish is called at the distribution stage. For example, they may be called Mexico brown or Guiana pink.

Well-known brown-toned shrimp include Ushi ebi (Black tiger shrimp) and Mexico brown (Yellowleg shrimp). Pink-toned types include Guiana pink (Pink spotted shrimp) and Nigeria pink ebi (Southern pink shrimp). White-toned shrimp include Taisho ebi (Fleshly prawn),  Banana ebi (Banana Prawn) and Vannamei ebi (Whiteleg shrimp). There are many sushi restaurants that use pink and brown-toned sushi that turn into a nice red color when boiled. While the meat of white-toned shrimp is soft, it turns a whitish color when boiled and doesn’t look very appetizing. However, due to the splendid, large tail, it is perfect for tempura or fried prawns.

Next, We will touch on the characteristics of shrimp that is typically imported to Japan. All these types are actually related to the Kuruma prawn, which is representative of premium shrimp and a familiar ingredient of sushi. In other words, these imports are alternatives to make up for the shrimp consumption in Japan that can’t be covered by the Kuruma prawn. Normally the head is removed, it is frozen, packed in large lots, and then embarks on the distribution channel in Japan.

It is found from the Indian Ocean to the Pacific Ocean, the Malay Archipelago and Australia.  The species is of considerable commercial importance in the Yellow Sea, East China Sea and Korean Bight, where it is trawled. It is sold in Korea, China, Japan and Hong Kong. This is a large shrimp that reaches up to 25 cm in body length. The appearance is similar to the Kuruma ebi, but without any special pattern. The edge of the abdomen is a dark brown color. There are 28 known species related to the Kuruma ebi. In the Toyosu market, those with a striped pattern are Kuruma ebi, and those without are Taisho ebi. In Japanese it’s been dubbed “Korai ebi” is due to the fact that it is often caught in the waters off the west coast of the Korean peninsula. The soft meat has a sweetness that makes this shrimp delicious. The number of wild Taisho ebi has decreased drastically in recent years. The coloring is lighter than Kuruma prawn and Black tiger shrimp, but darker than other white-toned shrimp. This type has a long history compared to other imported frozen shrimp and such high volumes were imported from China that it was called Chinese Taisho. It accounted for the majority of the market share until farmed Black tiger shrimp started to appear on the market.

Weighs between 18 to 30 g per shrimp. This shrimp comes from Australia and is colored like a banana. The meat is soft and has a sweetness. Sometimes it is also sold as Taisho ebi. The body is thinner and slenderer than the Black tiger shrimp.

This is simply known as Mexico shrimp. It is found on the west coasts of North and South America in the warm waters from southern California to Peru. The maximum standard length is 18.0 cm. It occurs at depths from 15 to 100 m, common between 25 to 50 m, in bottom mud or sandy mud marine environment. Juveniles are rarely found in estuarine environment. This is one of the representative types of imported frozen shrimp and has been imported in large volumes. It is often used for sushi because of the soft meat, good flavor and nice coloring. This is one of the highest grades of imported shrimp. 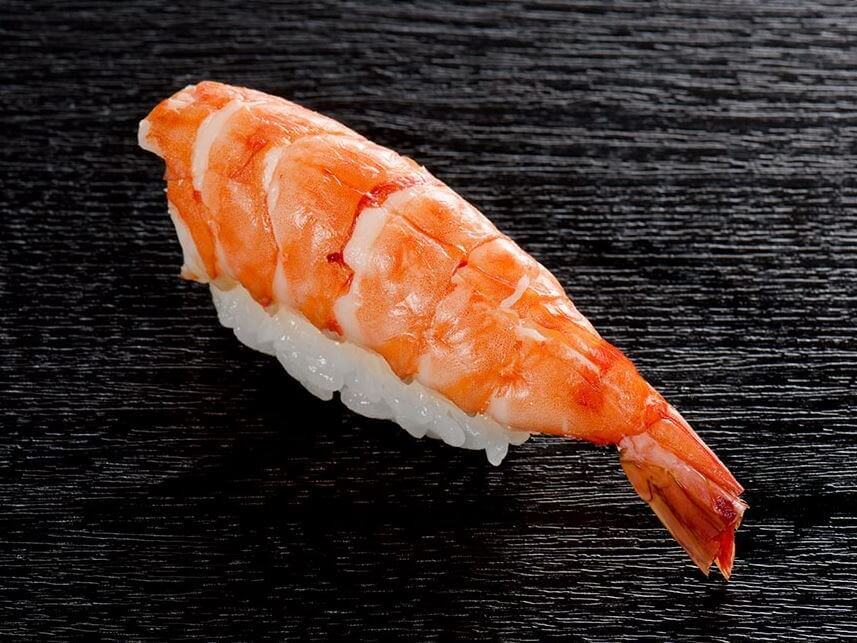 This is a reddish-brown colored shrimp with a striped pattern from Australia. It is often imported with the head intact. The meat has a sweetness and the soft coloring is also nice. It is used as an alternat to Kuruma prawn. Most are caught in the wild, especially in Australia’s Gulf of Carpentaria.

Finally, the shrimp introduced in this section is consumed not only in Japan, but all over the world. Judging by the images on social media, takeout sushi and the frozen shrimp sold at Costco are made from one of the types of shrimp described here. If you’re going to learn about sushi, it’s important to learn the types of shrimp used in sushi.