The most familiar example of Kaiseki Ryori is the food served at hot spring resorts.

Of them, Sekisaba is a premium fish that can go for as high as US $50 per fish. So, what kind of fish is Sekisaba and what’s the difference between it and normal Saba (Mackerel)?

Sekisaba is a Saba caught in the Hoyo Strait with a fishing pole by a union member of the Saganoseki branch of the Oita National Federation of Fisheries Cooperative (JF Oita). In other words, Sekisaba is not a type of Saba, but a premium fish created by differentiating the fishing method.

Sekisaba started to become known all over Japan between the late 1980s and early 1990s. Until then, Sekisaba was only known as a commonplace fish that was caught incidentally with Aji and went for US $2 per fish.

However, the Saganoseki branch of JF Oita applied for the first trademark ever in the industry and then grew the brand through methods such as tagging each individual fish by hand. This resulted in recognition of its taste as “Saba that can be enjoyed even as sashimi” (while Saba is generally a fish that loses its freshness easily and not eaten raw), catapulting it to a national constituency  After that, the thorough quality management and branding paid off and the price jumped to 10 times that of normal Saba.

The first difference between Sekisaba and normal Saba is that Sekisaba is caught carefully, one at a time. The use of ground bait is also banned so that the Sekisaba won’t eat anything but the natural diet (avoiding odor). Each fisher is only allowed to use fishing lures they make from fish skin or ragworms. Fish caught in this way are let out into a live holding tank on the ship and brought to the fishing port alive. After arriving at the port, the tank on the ship is checked, the fish size is looked at from the water surface and the approximate weight is measured. This method is called “Tsurugai”. This is because when the fish is placed on a scale, it struggles violently and can injure itself. The fish are allowed to calm down in the tank for a day at the fishing port. At the time of shipping, Ikejime is performed, in which a knife is put into gill parts, the spinal cord is cut, and then it is submerged into saltwater and the blood is let out. After that a processing method called Shinkeijime is performed in which a wire is inserted into the spinal cord to put the fish in a state of asphyxiation. Therefore, there is little damage to the fish, maintaining the freshness.

The Hoyo Strait where Sekisaba is caught is rich in plankton, which the Sekisaba feeds on, and the flow of the tide is fast. The reason Sekisaba meat firms well and is fatty year-round is thanks to the good environment of the sea it is raised in.

If you come across a Sekisaba that so much work has been put into, try it as sashimi, not Nigiri sushi. This is because Saba, which has a peculiarity to it, is unpopular among some people. However, Sekisaba doesn’t have this off-taste and doesn’t taste like Mackerel, so even people who don’t care for fish should be able to find it tasty. 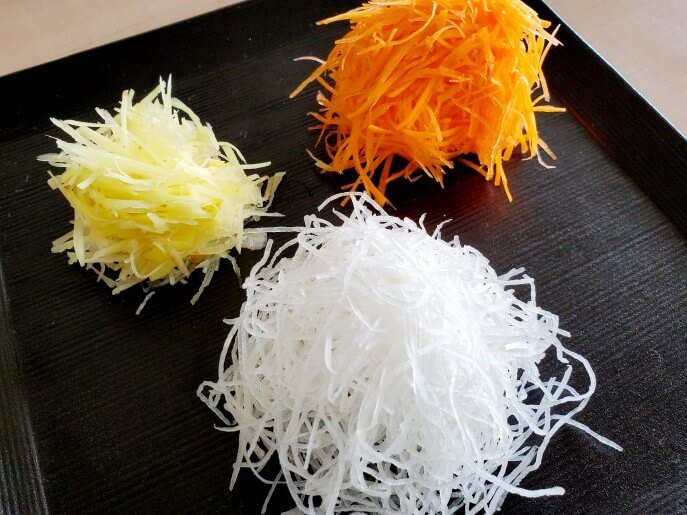 Ken is considered to be better the longer and thinner it is, but this is a mistake. Not only is Ken tangled and difficult to eat, but it also doesn’t give any sense of the flavor of the materials. It’s long been said that 10 cm is a reasonable length and this is also the length that looks the most refined.

Many people believe that the thinly cut daikon radish strips that accompany sushi are tsuma. That is not tsuma. It’s called ken. Besides daikon radish, udo, pumpkin, cucumber, carrots and turnips are also used. It is cut into thin strands and stood up next to sashimi like a sword (which is called “ken” in Japanese). However, when the sashimi is laid on top of it, it is called shikitsuma. While it is a bit confusing, in that case it is a type of tsuma. Since the Meiji era, combos of many different types of sushi have become popular, and with it larger dishes have become necessary. Therefore, there has also been a tendency to make it more showy. It’s only natural that the types of tsuma increase to place focus on the highly valued seafood, but if there is too much ken, it will take over the space meant for the sashimi. 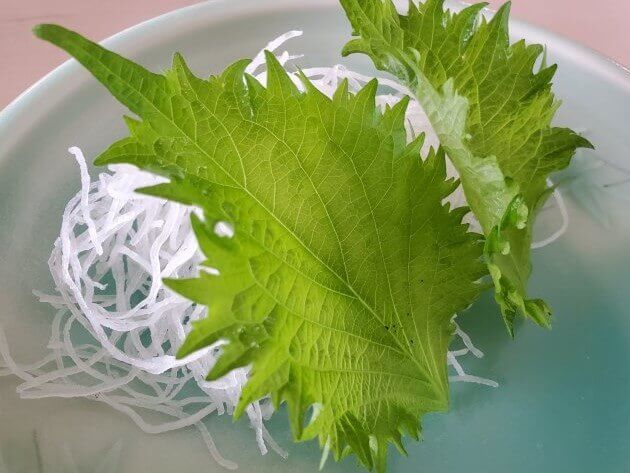 One point of note is that the most commonly used shikitsuma, green shiso, is occasionally used to obstruct fragrances that are too strong for white fish and shellfish like flatfish and flounder. Furthermore, it’s a rule that shikitsuma, which is a leaf, is not used on plates shaped like a leaf, but what is served and how it is arranged is ultimately up to the chef. 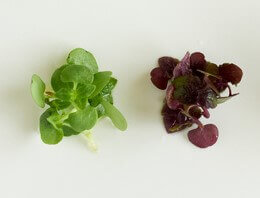