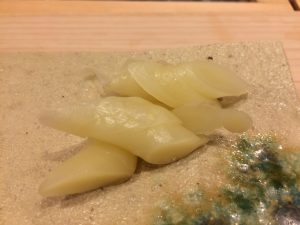 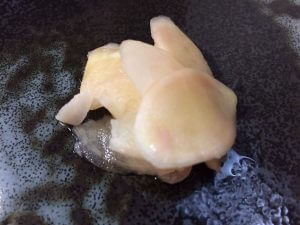 Using too much soy sauce spoils delicious sushi so make sure to only put a bit of soy sauce in the special dish. Make sure to tilt the sushi to the side and put just a dab on the end of the topping. Gari can be used as a brush to apply soy sauce to sushi rolls since they cannot be tilted. However, there are differing opinions as to whether this is a refined way to eat or not. Many people say it was basically made up by a publishing company. You just need a few drops in the soy sauce cruet. Actually at very fancy establishments the sushi is served with Nikiri so normal soy sauce is never used for dipping.

This ginger includes Zingerone, a pungent component, and Gingerol, a spice component that changes to Shogaol when heated. Zingerone and Shogaol combine with the components that cause the fishy smell of fish and can eliminate that smell from its source. It makes sense to use ginger as a condiment for fish known for a stronger smell, like horse mackerel and bonito. The Gari served with sushi utilizes the effects of these components effectively for the enjoyment of the delicious taste of the sushi. 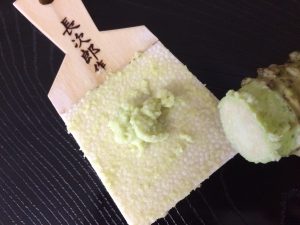 On the other hand, wasabi works by numbing senses of taste and smell with a stimulating spice so that the consumer doesn’t experience the fishy smell.

Furthermore, when you try to eat a light sushi topping after one with a richer flavor, a bit of Gari will cleanse your palette so you can fully enjoy the lighter fish. The pungent component also accelerates saliva production, assists with digestion and enhances absorption.