For example, every Frenchman knows that Chablis wine and Belon oysters go together like peanut butter and jelly. The soil of Chablis is made of the stratum that dates back to the Kimmeridgian age and a unique characteristic is that the soil is rich in fossils of small oysters and shellfish. That is why oysters and Chablis wine are said to be the perfect pairing. However, surely there are Japanese people who sense the fishy odor when having Chablis wine and Japanese oysters (Magaki) together. Therefore, some people say that sake is definitely preferred over wine.

The reason for this is that the types of oysters in France and Japan differ. 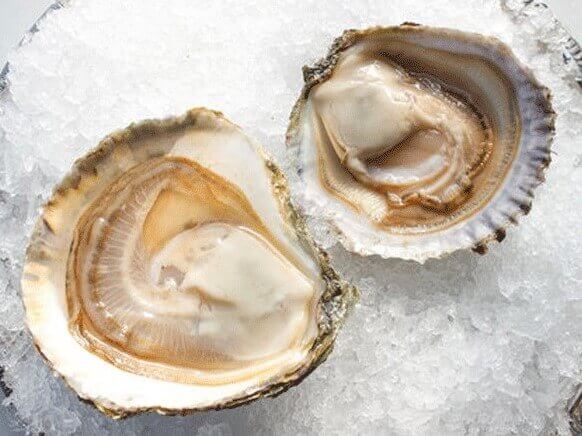 Famous for its Belon brand name, the oyster native to Europe has a flat, rounded shell. It belongs to the genus Ostrea. To be honest, Belon oysters aren’t sweet and don’t have a distinguished flavor compared to Japanese oysters, and the salty fragrance of the sea is dulled, so it can seem less flavorful. 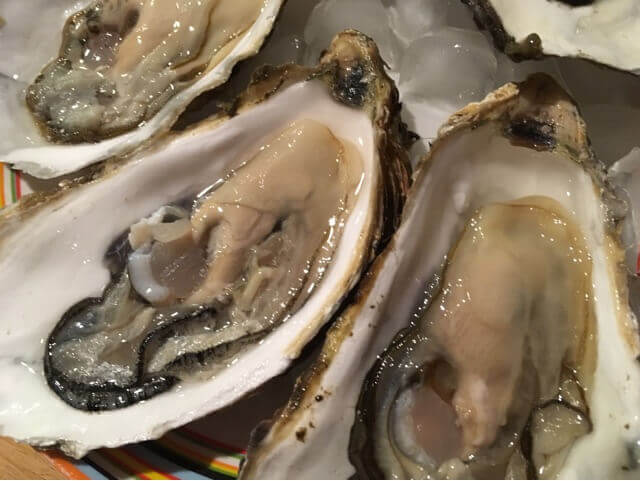 Meanwhile, the Japanese oyster is elongated and shaped like a raindrop. It is characterized by a smell like it swallowed the whole ocean. This is the main species farmed in Japan. It belongs to the genus Crassostrea. The taste is as if the umami components of the sea have all been concentrated together in one little shell.

Going back to pairing Chablis wine with oysters, it’s common sense in the world of flavors that items with basically similar components pair well together.

The issue lies in how wine is made. Chablis wine contains lactic acid because it is made through forced mal-lactic fermentation. Because it contains this lactic acid, it is partially fighting against the Belon oyster, which has a high glycogen content. In addition, lactic acid is called “warm organic acid”, and it has the property of becoming delicious at warm temperatures. Oysters are eaten cold, so they aren’t good for taking advantage of “warm organic acids”.

Therefore, it can be said that rather than Chablis wine, it goes well with cold organic acid white wine that is delicious when cooled to 7 or 8 degrees, for example, German Franken wine.

So then, what should be done when pairing oysters with Chablis wine?!

However, in France there was a time when a disease spread that caused the death of the Belon oyster, nearly rendering it extinct. Therefore, since the Japanese oyster has been transplanted so many times, it is said that nowadays, at least 90% are Japanese oysters hybrids of Japanese oysters.

That means the question remains among Japanese as to whether the combination of Chablis wine and oysters really is a match made in heaven or not. Personally, we’ve never heard of oysters served without lemon, so the fishy smell really isn’t an issue at all in the end.

In the past, the word ‘mariage’ was often used when matching sushi and sake. Of course, that word is still used, but ‘pairing’ is more common now. It doesn’t matter which you use, both have the meaning of ‘matching’ or ‘combining’. The only real difference is that pairing is closer to just matching things, while mariage has the implication of combining things to create something new. 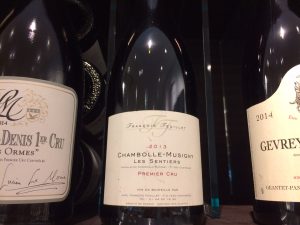 On the other hand, when considering compatibility with wine, toppings that use strong seasonings like Nikiri, including tuna and conger eel with sweet filling, match superbly with matured red wines such as Pinot Noir.

White wines such as a lighter Chardonnay, Sauvignon Blanc and Riesling go well with white fish flavored with Citrus sudachi and yuzu or squid eaten with salt. 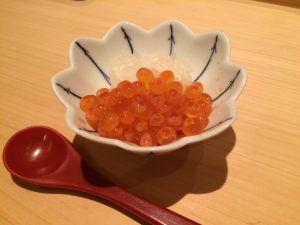 However, neither red nor white wine goes well with herring or salmon roe. The iron specific to wine is said to contribute to the fishy smell of fish roe.

In the research of one wine manufacturer, the factor that generates the smell of fish and shellfish is the iron (ferrous ion) found in wine. Wines with relatively low levels of iron such as Sherry (Spain), Champagne (France) fermented twice in the bottle, Cava (Spain) and Franciacorta (Italy) mature without adding sulfite, which prevents oxidization. This reduces the ferrous ion in the wine and the fishy smell is virtually unnoticeable.

Either way, the research of wine and sushi pairings is still insufficient and there haven’t yet been any reports of unexpected compatibility. If anyone out there has found a wine that does pair well with herring or salmon roe, please be sure to share that information with us.