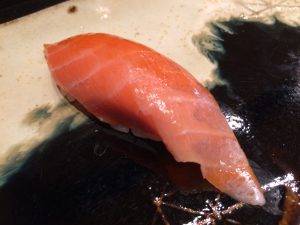 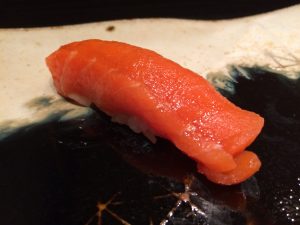 The type of salmon (sake) you find in Japan is Chum salmon. However, most of the salmon served raw at sushi restaurants is Atlantic salmon. This is a popular topping throughout the world due to the high fat content and smooth texture achieved by sea farming in places like Norway and Chile. The fish are strictly managed from water quality to the effects on the environment, so there are very few issues with parasites and the salmon can be eaten raw. However the fact remains that the fish are administered a number of chemicals due to concern of spread of disease-causing germs in the farms.

The fifth generation sushi chef at one long-standing shop says, “If it’s what the customers want, then salmon may also be rolled as Nigirizushi in the near future.” It may even become part of the standard menu.

*Keiji are young salmon with immature ovaries or testes. Only 1-2 Keiji are found in a normal catch of 10,000 salmon. Normal salmon fat content is 2-15% but the Keiji have a very high body fat percentage at 20-30%.

**Tokishirazu are salmon swimming upstream at the beginning of summer. They are the same chum salmon found in the fall, but since they aren’t caught during the spawning season, the fish don’t have eggs or milt, and instead have a high fat content. The name “Tokishirazu” stems from the fact that these fish are caught out of season, in summer and the name means ”ignorant of time” 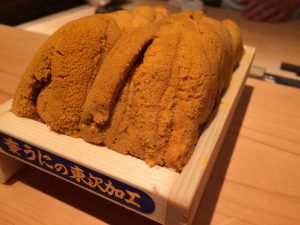 Some people say that “Sea urchin in a wooden box (called ‘hako-uni’ or ‘ori-uni’ or ‘boxed sea urchin’) has a bitter medicine taste”. When a sea urchin loses its freshness, its starts to disintegrate so an additive called alum is used to maintain its shape. If you’ve ever tried a sea urchin that tasted bitter*, this may be the reason. 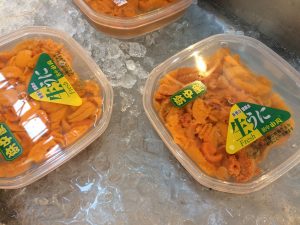 What is saltwater sea urchin?

Sea urchin soaked in brine without using alum (called ‘ensui-uni’ or ‘saltwater sea urchin’) is also commonly found. There is also a new technology that doesn’t use alum. In this method nitrogen water (water from which oxygen has been removed and then nitrogen dissolved) is used when sealing. The effect of replacing oxygen with nitrogen is inhibited oxidation, maintaining freshness of the sea urchin.

*An “off flavor” that takes away from the primary good tastes. 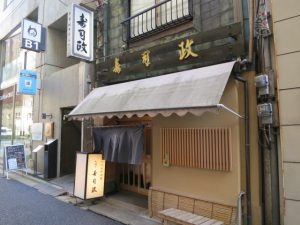 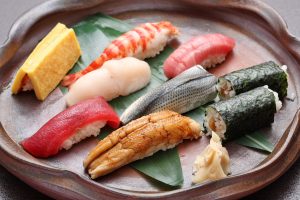 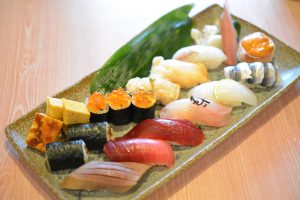 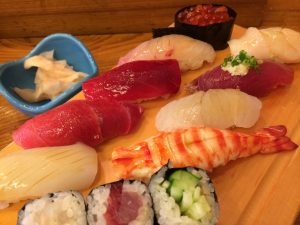